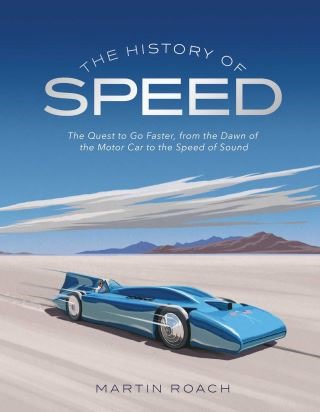 The History of Speed

Ever since we built machines that could transport us, there has been a desire to find ways to make them go faster. For some, going faster isn't enough - they want to be the fastest. This book celebrates those who have built the machines and driven them at ever greater speeds. This is The History of Speed.

Bestselling motorsport writer Martin Roach tells the extraordinary story of those who have come to be obsessed by speed. From Camille Jenatzy, 'the Red Devil', who became the first man to drive at over 100kmh in 1899, through the golden age of Malcolm Campbell and his Bluebird, and on to the modern era of jet- and rocket-propelled cars, we have gone faster and faster. But this book is not just about these record-breakers, Roach also looks at the technology, the engines and the inventors who helped progress in speed at all levels, from Formula One to the supercars from the likes of Ferrari and Mercedes that are eagerly snapped up by collectors, rarely to be seen on the road.

Accompanied by some of the most stunning images of the cars and those who made and drove them, Roach tells a wonderful story of innovation and invention. He talks to some of the great drivers to find out what inspires them to risk their lives, and finds out from engineers how they developed their ideas. Along the way, we hear some remarkable tale and anecdotes, but also find out how the pursuit of speed can also have its costs, with many tragic heroes and heroines falling along the way.

If you've ever thrilled to the roar of a sports car engine, of loved the feel of the g-force as you accelerate away, or even looked on in wonder at a powerful engine, The History of Speed is a book that you will not want to miss out on.

Martin Roach:
Martin Roach is a bestselling automotive author and ghostwriter who has written books on motorsport, music, celebrity, film and youth culture. He has three Number 1 bestsellers and more than a dozen other bestsellers to his name. He gained a degree in Historical Research before writing his first book aged 21.