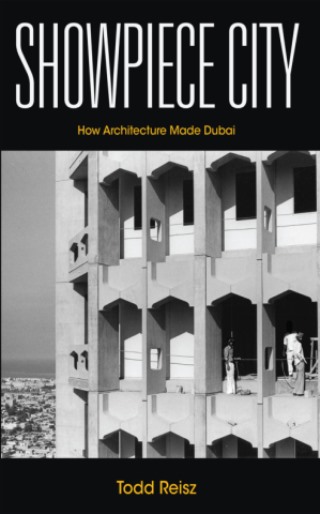 How Architecture Made Dubai

Staggering skylines and boastful architecture make Dubai famous—this book traces them back to a twentieth-century plan for survival.

In 1959, experts agreed that if Dubai was to become something more than an unruly port, a plan was needed. Specifically, a town plan was prescribed to fortify the city from obscurity and disorder. With the proverbial handshake, Dubai's ruler hired British architect John Harris to design Dubai's strategy for capturing the world's attention—and then its investments.

Showpiece City recounts the story of how Harris and other hired professionals planned Dubai's spectacular transformation through the 1970s. Drawing on exclusive interviews, private archives, dog-eared photographs, and previously overlooked government documents, Todd Reisz reveals the braggadocio and persistence that sold Dubai as a profitable business plan. Architecture made that plan something to behold. Reisz highlights initial architectural achievements—including the city's first hospital, national bank, and skyscraper—designed as showpieces to proclaim Dubai's place on the world stage.

Reisz explores the overlooked history of a skyline that did not simply rise from the sands. In the city's earliest modern architecture, he finds the foundations of an urban survival strategy of debt-wielding brinkmanship and constant pitch making. Dubai became a testing ground for the global city—and prefigured how urbanization now happens everywhere.

Todd Reisz: Todd Reisz lives in Amsterdam and is an architect and writer. His work has been featured in The Guardian, Architectural Design, and Artforum. He has taught architectural and urban design at Yale University and Harvard University.