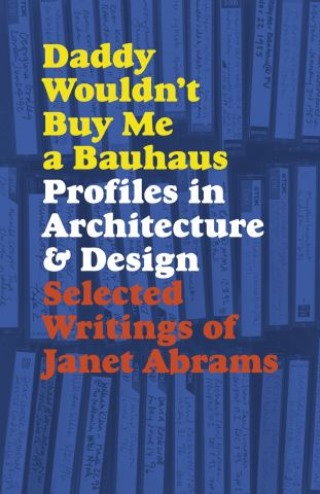 Daddy Wouldn't Buy Me a Bauhaus

Profiles in Architecture and Design

Daddy Wouldn't Buy Me a Bauhaus collects the unparalleled writings of legendary British wordsmith Janet Abrams for the first time. From pivotal figures in international modernism to the pioneers of digital medium, Abrams explored the ideas, theories, and emotions that fueled their work.

The book's twenty-six profiles, written in Abrams's signature, personal, often hilarious style, include Reyner Banham, Berthold Lubetkin, Philip Johnson, Paul Rand, Phyllis Lambert, Frank Gehry, Rem Koolhaas, Muriel Cooper, April Greiman, and Michael Bloomberg. Many of the profiles are back in print for the first time, having originally appeared in Blueprint, I.D. magazine, the Independent, and in books and catalogs from the 1980s through the early 2000s. A foreword by Blueprint's founding editor, Deyan Sudjic, and new reflections by Abrams set the stage.

Janet Abrams: Janet Abrams's career as a writer and editor spans several decades, cities, and disciplines, with a focus on architecture, design, photography, digital media and ceramics. Trained as a journalist in her native London, she became features editor of weekly newspaper Building Design at age twenty-three, before earning her Ph.D. at Princeton University as a Fulbright Scholar just as Blueprint magazine was launched and she became its US correspondent. Back in London in the late 1980s, she wrote for the Independent and on film and visual arts for Sight & Sound and New Statesman & Society. In the early 1990s, she became writer-at-large for I.D. Magazine in New York, where she wrote on new media and contributed to Domus, Frieze, Lotus International, Metropolis, Ottagono, Print, Skyline and the New York Times magazine, as well as exhibition catalogs, monographs, and books. From 2000-2008, as director of the University of Minnesota Design Institute, she launched a publishing program spanning print, broadcasting and digital media. She is co-editor of Else/Where: Mapping—New Cartographies of Networks and Territories.