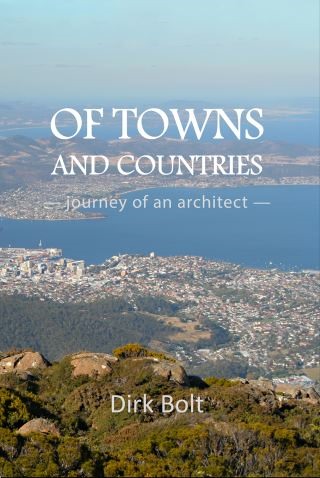 Of Towns And Countries

journey of an architect

OF TOWNS AND COUNTRIES presents a rare insight into seven decades of global change. The book is a mini-history of the period from post-World War II recovery to the recent warning by the United Nations of an existential threat from climate change. ADVENTURES AND DANGERS
This change is told through the eyes of an architect and his family. Born in Holland, he travels to Australia, where he wins many design awards. In 1970, he joins the UN. The family moves often, encounter adventures and face life-threatening dangers. He battles with problems that seem endemic to international development. RESPONDING TO CLIMATE CHANGE
When he finds links between development and what makes the clock of climate change tick, he focuses on the role of urbanisation. The book follows his increasing sense of alarm and the evolution of his response. Teaching at universities, he develops a new approach to the creation of 'future-proof' cities. Readers wishing to follow up on this can find more detail in the two appendices. REALITY AND FICTION
The chapters of the book are memory-based and supplemented by illustrations. They tell a fascinating tale of life on three continents and the Pacific Ocean. By contrast, the prologue and epilogue embellish reality with elements of fiction. The prologue starts the book in the past, and in Iceland the epilogue takes it to a surprising end.

Dirk Bolt: Dirk Bolt was born in the Netherlands. As a student he migrated to Australia, where he became an award-winning architect in Hobart and Canberra. When, as an urban planner, he became concerned about urbanisation, the environment, climate change and sustainability, he started to work for the UN and in international development. He taught at the University of Auckland, and was appointed professor in the Netherlands. He worked and travelled with his family in Australia, Africa, Asia, the Pacific and Europe; he now lives with his wife Kusha in Scotland.