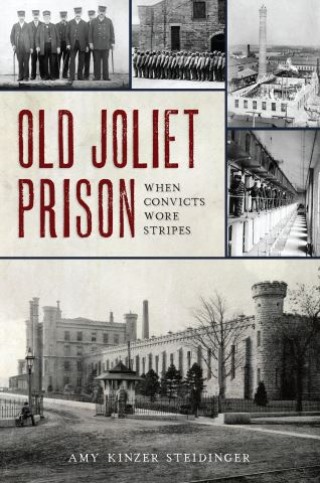 In 1857, convicts began breaking rock to build the walls of the Illinois State penitentiary at Joliet, the prison that would later confine them. For a century and a half, thousands of men and women were sentenced to do time in this historic, castle-like fortress on Collins Street. Its bakery fed victims of the Great Chicago Fire, and its locks frustrated pickpockets from the world's fair. Even newspaper-selling sensations like the Lambeth Poisoner, the Haymarket Anarchists, the Marcus Train Robbers and Fainting Bertha became numbers once they passed through the gates. Author Amy Steidinger recovers stories of lunatics and lawmen, counterfeiters and call girls, grave robbers and politicians.

Amy Kinzer Steidinger: Amy has spent the last twenty-five years as a teacher and a genealogist. Many of her years teaching were spent working in juvenile justice. She went back to school and earned a master's degree in history from Illinois State University. She loves to travel and is always planning the next adventure. Her greatest joy is her family--her husband, Jay, and their four children, who have grown up to be amazing adults.