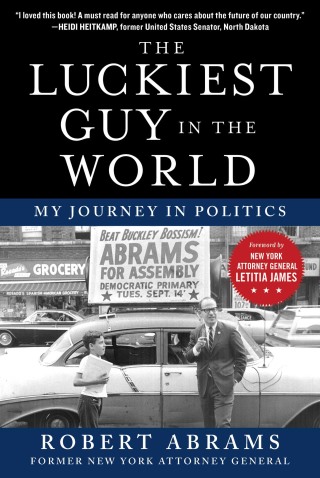 The Luckiest Guy in the World

My Journey in Politics

The Remarkable True Story of Robert Abrams, the man who changed the New York Attorney General's Office for Good.

At the heart of this political memoir is the story of how the office of state attorney general, an historically sleepy backwater post, has evolved into a front line major protector of the rights of citizens across the country. New York State Attorney General Robert Abrams exercised leadership in organizing attorneys general throughout the nation to take collective action against the Reagan administration’s punishing laissez-faire anti-regulatory policies. Abrams and his fellow attorneys general set the precedent for the successful challenges mounted by today’s attorneys general against the Trump administration’s immigration policies and rollback of consumer and civil rights protections.

Through lively anecdotes, Abrams captures the Bronx of his childhood, his early insurgent grassroots campaigns taking on the powerful Democratic Party machine, the urban challenges of being Bronx Borough President, the turbulent Vietnam anti-war years, and the beginnings of the environmental justice movement. He revisits the explosive Tawana Brawley case where an African American teenage girl alleged rape and brutality by a group of white men that included law enforcement officials.

Abrams provides behind-the-scenes interactions with important figures ranging from Golda Meir, George McGovern, Mario Cuomo, Robert Moses, and Cesar Chavez to Shirley Chisholm. The book demonstrates how ordinary people battling unequal odds against corporate and other powerful forces can prevail when laws are enforced to protect their rights. A chapter about the infamous Love Canal case details the shocking revelation that buried beneath the seemingly placid upstate New York working class community lay tons of toxic waste spawning chronic health problems for residents. Abrams in a landmark lawsuit took on Occidental Petroleum for its callous actions, paved the way for the passage of the Superfund Act and a victory for the emerging environmental justice movement. He describes dramatic confrontations with the radical anti-abortion group, Operation Rescue, and its increasingly violent efforts to deny a woman’s right to choose. His courageous, path-breaking support of LGBT rights, seeking to end the prevailing bigotry with legal victories that ultimately led to marriage equality is also revisited.

In The Luckiest Guy in the World, Robert Abrams wears his progressive values on his sleeve, providing an optimistic view about our nation’s return to its fundamental values. Visit luckiestguyintheworldbobabrams.com for more information.

Robert Abrams: Robert Abrams, born and raised in the Bronx, went on to become a crusading attorney general of New York from 1979 to 1993. As a reformer, he battled political machine bosses and special interests, winning landmark victories for consumers, protecting the environment, and a woman’s right to choose. He led attorneys general across the nation to protect the rights of all Americans.