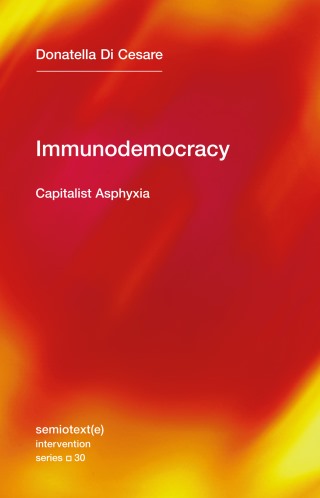 A stimulating and profound portrayal of the epochal event that has already left its mark on the twenty-first century.

Immunodemocracy offers a stimulating and profound portrayal of the epochal event that has already left its mark on the twenty-first century. Moving from the ecological question to the rule of experts, from the state of exception to immunitarian democracy, from rule by fear to the contagion of conspiracy theory, from forced distancing to digital control, Donatella Di Cesare examines how existence is already changing--and what its future political effects may be. In her own personal style, the author reconstructs the dramatic phases of what she calls "the breathing catastrophe." Coronavirus is a sovereign virus that skirts its way around the walls of patriotism and the sovereignists' imperious frontiers. And it reveals in all its terrible crudeness the immunitarian logic that excludes the weakest and hits the poorest. The Cordon sanitaire of disengagement risks expanding beyond all proportion. The disparity between the protected and the helpless--a challenge to any idea of justice--has never been so blatant. The virus has not introduced, but merely brought out into the open the ruthlessness of the capitalism that is now wrapping us in its devastating spiral, in its compulsive, asphyxial vortex. Is it our final warning? The violent global pandemic shows that it is impossible for us to survive if we don't help each other. We will need to protect ourselves from protection and the specter of absolute immunization. When breathing can no longer be taken for granted, we need to rethink a new way of living together.

Donatella Di Cesare: Donatella Di Cesare teaches Theoretical Philosophy at the Sapienza University in Rome. One of the most significant voices on the Italian intellectual scene, she is an authoritative contributor to numerous newspapers, websites and journals both in Italy and abroad. Her books have been translated into eight languages.